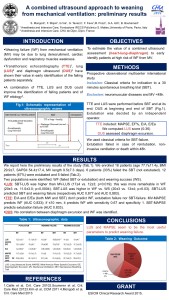 Introduction: Weaning failure (WF) from mechanical ventilation (MV) may be due to lung derecruitment, cardiac dysfunction and respiratory muscles weakness. Transthoracic echocardiography (TTE) [1], lung ultrasound (LUS) [2] and diaphragm ultrasound (DUS) [3] have shown their value in early identification of the failing patients separately. A combination of TTE, LUS and DUS could improve the identification of failing patients and of WF etiology [4]. We aimed to estimate the value of a combined ultrasound assessment (heart-lung-diaphragm) to early identify patients at high risk of WF from MV.

Conclusions: LUS and MAPSE seem to be the most useful parameters to predict weaning failure.