Good clinical outcome of kidney from DCD despite the long “no touch period”!

Donation after circulatory death (DCD) allows expansion of the donor pool. We report on 11 years of Italian experience by comparing the outcome of grafts from DCD and extracorporeal membrane oxygenation (ECMO) prior to death donation (EPD), a new donor category. We studied 58 kidney recipients from DCD or EPD and collected donor/recipient clinical characteristics. Primary non function (PNF) and delayed graft function (DGF) rates, dialysis need, hospitalization duration, and patient and graft survival rates were compared. The estimated glomerular filtration rate (eGFR) was measured throughout the follow-up. Better clinical outcomes were achieved with EPD than with DCD despite similar graft and patient survival rates The total warm ischemia time (WIT) was longer in the DCD group than in the EPD group. Pure WIT was the highest in the class II group. The DGF rate was higher in the DCD group than in the EPD group. PNF rate was similar in the groups. Dialysis need was the greatest and hospitalization the longest in the class II DCD group. eGFR was lower in the class II DCD group than in the EPD group. Our results indicate good clinical outcomes of kidney transplants from DCD despite the long “no-touch period” and show that ECMO in the procurement phase improves graft outcome, suggesting EPD as a source for pool expansion. 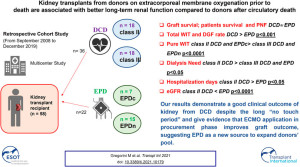 Click here to subscribe to our newsletter to be informed about the GRIP news and initiatives. At the moment there are 177 subscribers.
Newsletter archive